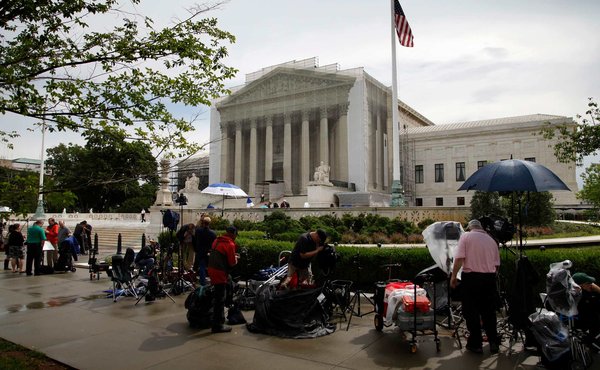 The news media waited for rulings outside the Supreme Court building on Thursday morning.   by ADAM LIPTAK

WASHINGTON — Human genes may not be patented, the Supreme Court ruled unanimously on Thursday. The decision is likely to reduce the cost of genetic testing for some health risks, and it may discourage investment in some forms of genetic research.

The case concerned patents held by Myriad Genetics, a Utah company, on genes that correlate with an increased risk of hereditary breast and ovarian cancer. The patents were challenged by scientists and doctors who said their research and ability to help patients had been frustrated.

After the ruling, at least three companies and two university labs said that they would begin offering genetic testing in the field of breast cancer.

“Myriad did not create anything,” Justice Clarence Thomas wrote for the court. “To be sure, it found an important and useful gene, but separating that gene from its surrounding genetic material is not an act of invention.”

The course of scientific research and medical testing in other fields will also be shaped by the court’s ruling, which drew a sharp distinction between DNA that appears in nature and synthetic DNA created in the laboratory. That distinction may alter the sort of research and development conducted by the businesses that invest in the expensive work of understanding genetic material.

The decision tracked the position of the Obama administration, which had urged the justices to rule that isolated DNA could not be patented, but that synthetic DNA created in the laboratory — complementary DNA, or cDNA — should be protected under the patent laws. In accepting that second argument, the ruling on Thursday provided a partial victory to Myriad and other companies that invest in genetic research.

The particular genes at issue received public attention after the actress Angelina Jolierevealed in May that she had had a preventive double mastectomy after learning that she had inherited a faulty copy of a gene that put her at high risk for breast cancer.

The price of the test, often more than $3,000, was partly a product of Myriad’s patent, putting it out of reach for some women.

That price “should come down significantly,” said Dr. Harry Ostrer, one of the plaintiffs in the case, as competitors start to offer their own tests. The ruling, he said, “will have an immediate impact on people’s health.”

Myriad’s stock price was up about 10 percent in early trading, a sign that investors believed that parts of the decision were helpful to the company. But the stock later dropped, closing the day down by more than 5 percent.

The central question for the justices in the case, Association for Molecular Pathology v. Myriad Genetics, No. 12-398, was whether isolated genes are “products of nature” that may not be patented or “human-made inventions” eligible for patent protection.

Myriad’s discovery of the precise location and sequence of the genes at issue, BRCA1 and BRCA2, did not qualify, Justice Thomas wrote. “A naturally occurring DNA segment is a product of nature and not patent eligible merely because it has been isolated,” he said. “It is undisputed that Myriad did not create or alter any of the genetic information encoded in the BRCA1 and BRCA2 genes.”

“Groundbreaking, innovative or even brilliant discovery does not by itself satisfy the criteria” for patent eligibility, he said.

Mutations in the two genes significantly increase the risk of cancer. Knowing the location of the genes enabled Myriad to develop tests to detect the mutations. The company blocked others from conducting tests based on its discovery, filing patent infringement suits against some of them.

Even as the court ruled that merely isolating a gene is not enough, it said that manipulating a gene to create something not found in nature is an invention eligible for patent protection.

“The lab technician unquestionably creates something new when cDNA is made,” Justice Thomas wrote.

He also left the door open for other ways for companies to profit from their research.

They may patent the methods of isolating genes, he said. “But the processes used by Myriad to isolate DNA were well understood by geneticists,” Justice Thomas wrote. He added that companies may also obtain patents on new applications of knowledge gained from genetic research.

Last year, a divided three-judge panel of a federal appeals court in Washington ruled for the company on both aspects of the case. All of the judges agreed that synthesized DNA could be patented, but they split over whether isolated but unaltered genes were sufficiently different from ones in the body to allow them to be protected. The majority, in a part of its decision reversed by the Supreme Court, said that merely removing DNA from the human body is an invention worthy of protection.

“The isolated DNA molecules before us are not found in nature,” Judge Alan D. Lourie wrote. “They are obtained in the laboratory and are man-made, the product of human ingenuity.”

Long passages of Justice Thomas’s opinion read like a science textbook, prompting Justice Antonin Scalia to issue a brief concurrence. He said the court had reached the right result but had gone astray in “going into fine details of molecular biology.”

“I am unable to affirm those details on my own knowledge or even my own belief,” Justice Scalia wrote.

The ruling on Thursday followed a unanimous Supreme Court decision last year that said medical tests relying on correlations between drug dosages and treatment were not eligible for patent protection.

Natural laws, Justice Stephen G. Breyer wrote for the court, may not be patented standing alone or in connection with processes that involve “well-understood, routine, conventional activity.”

A version of this article appeared in print on June 14, 2013, on page A1 of the New York edition with the headline: Justices, 9-0, Bar Patenting Human Genes.